He’s already been introduced at “Pride of Asano Stars”. He might have been meant to be a member of “Visualization of techniques” project since he entered ASANO Co., Ltd. as he was interested in motor sports and their parts. KATO sometimes showed repentance during the interview that was held when the project was turning to the final stage. His consciousness of craftsman that seeks a high quality probably made him do so.

He showed a glimpse of his consciousness of beauty when the interview came to a topic of difference between auto show and stock car. KATO says “ shapes of exhibited cars at auto show look beautiful because their car heights are low. The beautiful designs of stock cars change slightly because they are forced to increase their car heights to pass the automobile inspection in Japan. 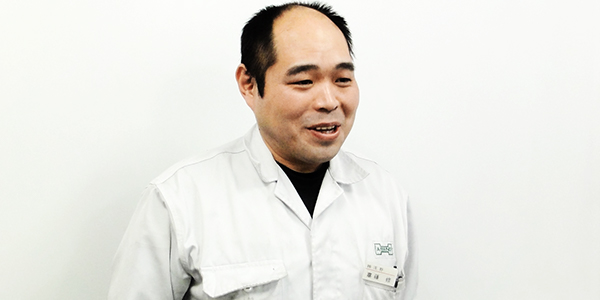 He says he is startled at the delicate surface treatment of import cars, especially European cars on the road. As “God is in the details” says, KATO always pays minute attention to the details, too.

KATO, who seeks high complete level, was in charge of CFRTP＊1 forming in the project. He gained experiences in design of thin sheet metal processing and CATIA＊2 before he was assigned to New Technology Development Department. He experienced CFRTP first time when he moved to New Technology Development Department. He says that he wants to reproduce the surface treatment of CFRTP of the scale model car once again. It’s a soul of craftsman that pursues the completeness and it might be Asano’s corporate culture that employees, including KATO pursue the higher.